Dedicated bike trails: can it really work in San Antonio? 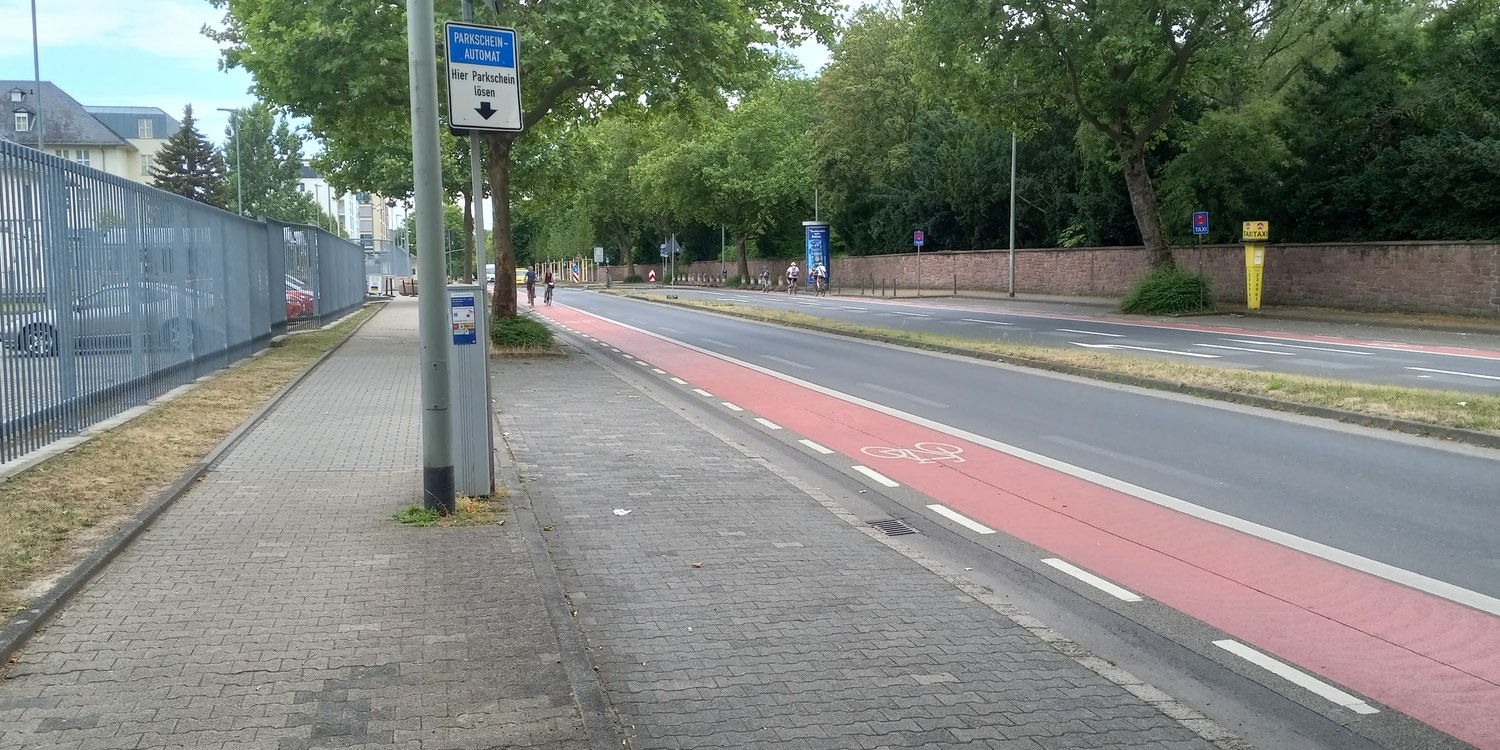 Dedicated bike trails for San Antonio? Can we get it to work? It is possible; however, a few things must be worked out before the Alamo City can achieve a viable system for cyclists. Already blessed with its ever-growing Howard W. Peak Greenway Trails System, city officials look for ways to transform San Antonio into a bike-friendly city.

Let's go north, up I-35 by a distance of 80 miles (129 km)—Austin, Texas, a city that has been acclaimed by various bicycle publications as a bicycle destination for the Lone Star State. Just as a quick look at such roads as Congress St. and Guadalupe St., one will find dedicated bike lanes laid out very similar to what one will find in Frankfurt, Copenhagen, and other European cities. In these venues, the lanes are approximately one meter wide with bike logos to indicate that the lane is reserved for cycling. Surprisingly, Austin has substantial enough cycling traffic that the rules are about the same: Don't walk in a bicycle lane! In a downloadable brochure PDF, they warned, "Look for oncoming people on bikes before parking or opening your door." The cool thing about Austin is that many of their bike lanes are color-coded in bright green—hence, think green. 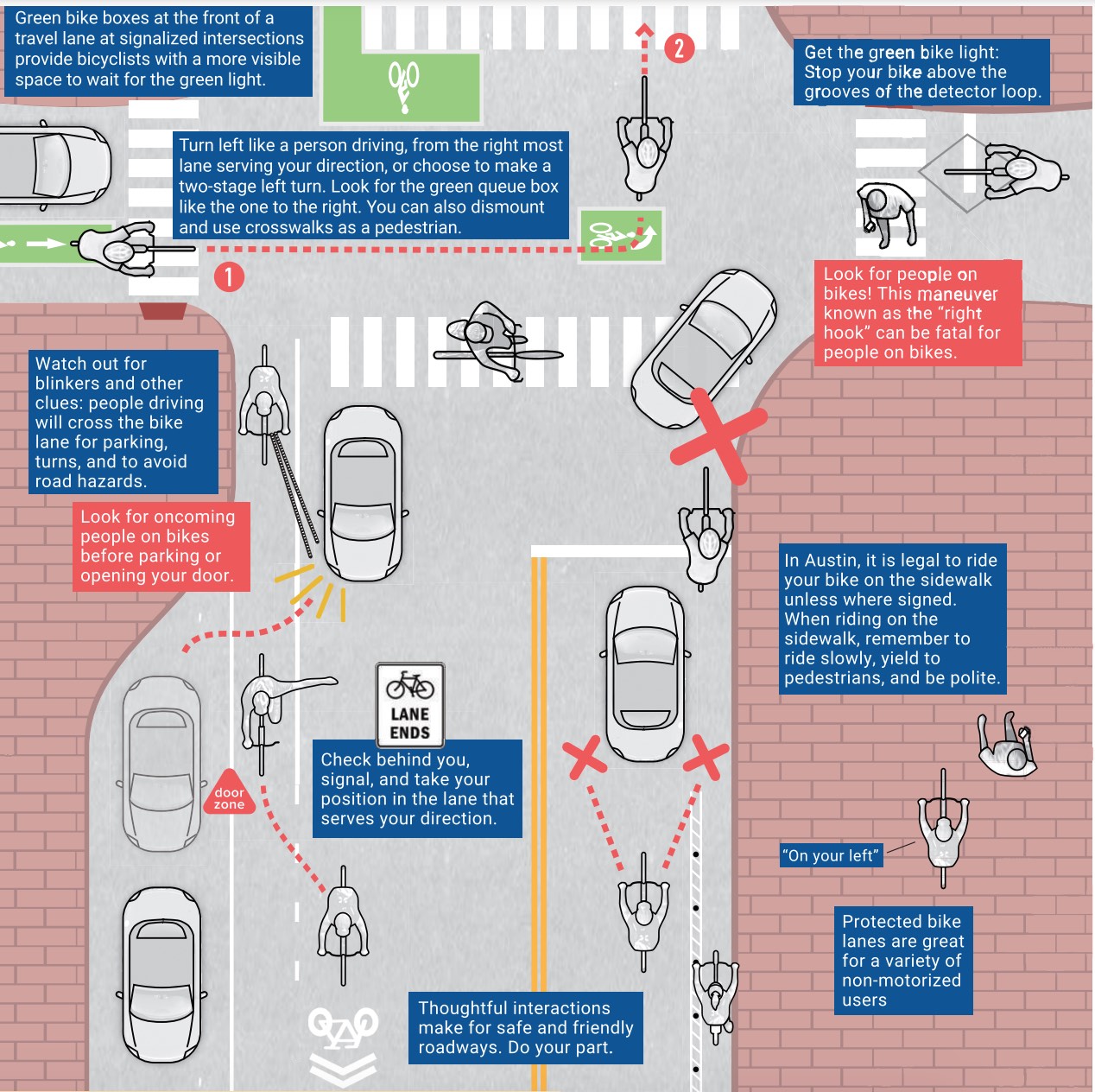 This will be an adjustment for San Antonio. The more cyclists, the safer it will be as noted by a Frankfurt cyclist. Likewise as in Austin, motorists have become accustomed to the presence of cyclists. Not only they watch out for other cars, they also watch out for bicycles. Unfortunately, cycling fatalities still occur often whether its Austin or Frankfurt. At least, an effort had been made to make cycling safer as it is a transportation necessity for many of these cities' inhabitants. 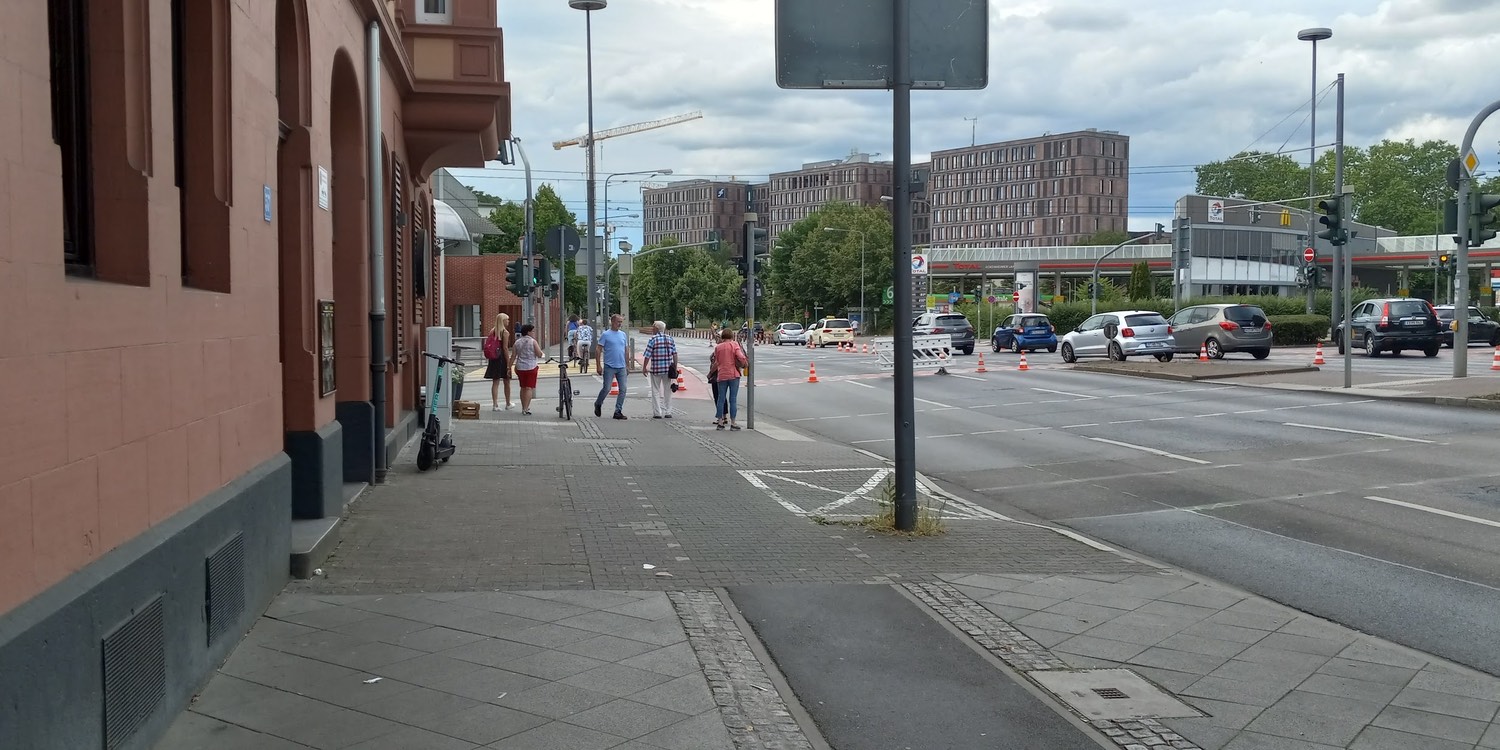 Not all intersections are consistent simply because of variants such as street widths and traffic controls. One will not find a consistency as intersections can vary. Apparently, there are no universal standards as lanes vary by brick patterns and pavement color. 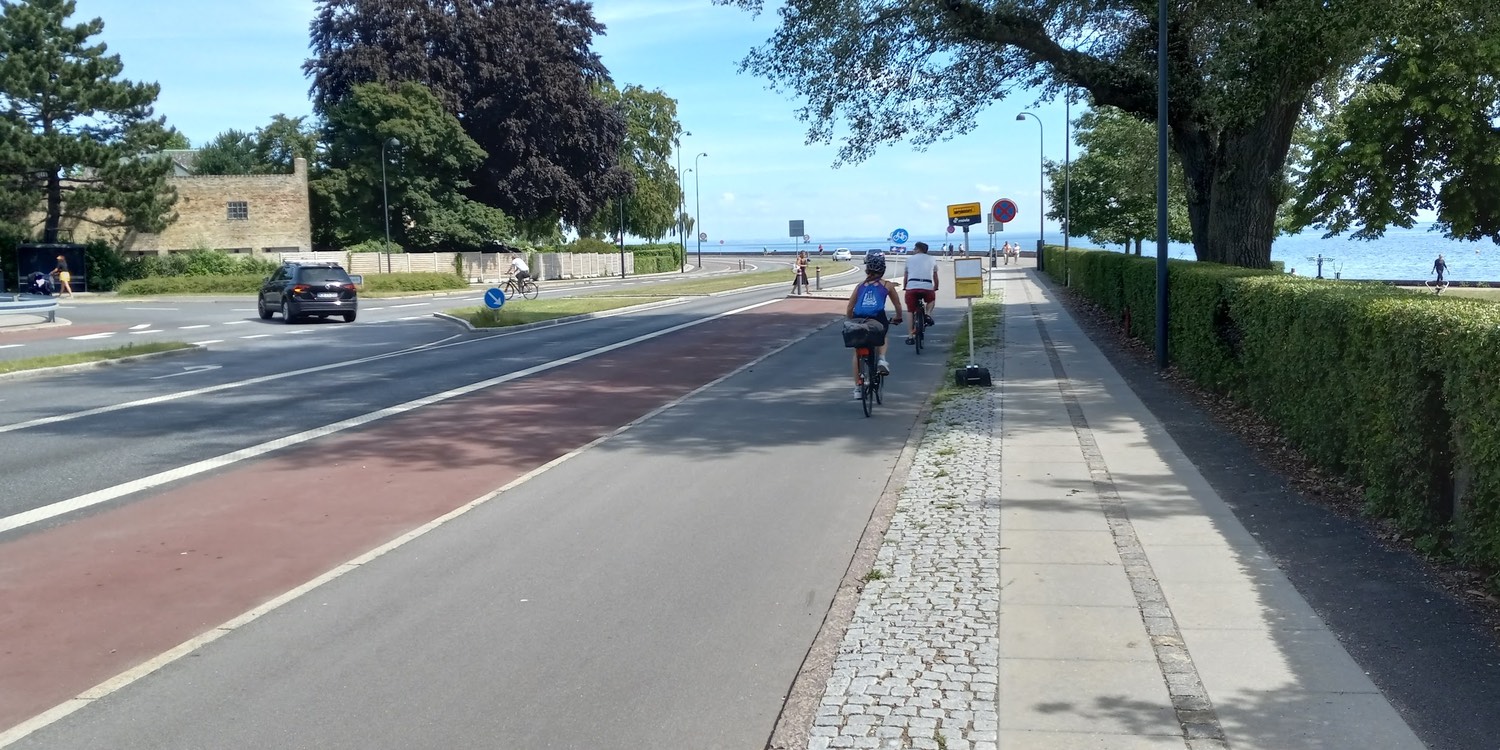 Two cyclists head toward the waterfront on Kystvejen in Charlottenlund, Denmark—Photo: SRR

Other cities in the U.S. have made strives to make their communities bike friendly. In the Fayetteville-Springdale-Rogers-Bentonville municipalities in northwest Arkansas, a relentless effort had proven that cycling is a major endeavor. Likewise to Frankfurt, bike crossings have been painted red. In some cases, red brick crossings have been featured. Like Austin, Fayetteville is a university town that has a draw for cycling.

Two factors must take effect before cycling can catch on: parking becomes more expensive and traffic makes it too time consuming. Once that happens, folks will find means to save time which can mean cycling to their destinations. At the sidelines of stage 1 of the Tour de France, a medical doctor said that it takes less time to reach a destination by bicycles and trains rather than by car. 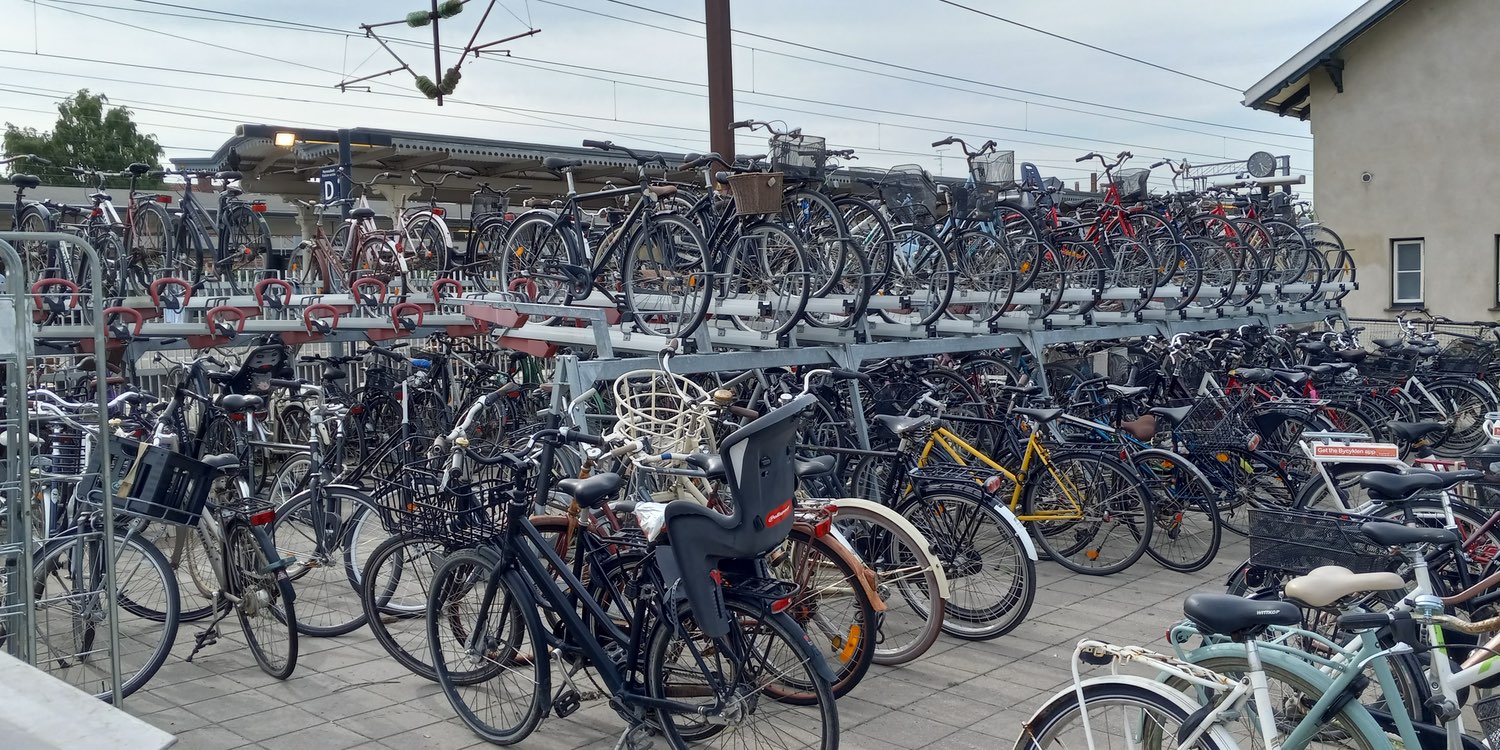 Bikes are placed on racks at the Kellerup train station, located north of Copenhagen—Photo: SRR

Texas like many other states has a bad motorists culture. A Bulverde police officer stated that guys in their diesel pickup trucks will pop the clutch and soot cyclists as a show of protest. Even though the cyclists ride the shoulders, it still slows down traffic and becomes a problem for many drivers. Quite often, motorists will deliberately toss their empty glass bottles onto bicycle lanes. A ride up New Braunfels Avenue is a good example. Bike lanes were plagued with shattered glass—not good for bicycle tires. Overcoming this issue will be around for some time, thus developing a cycling system would be a challenge.