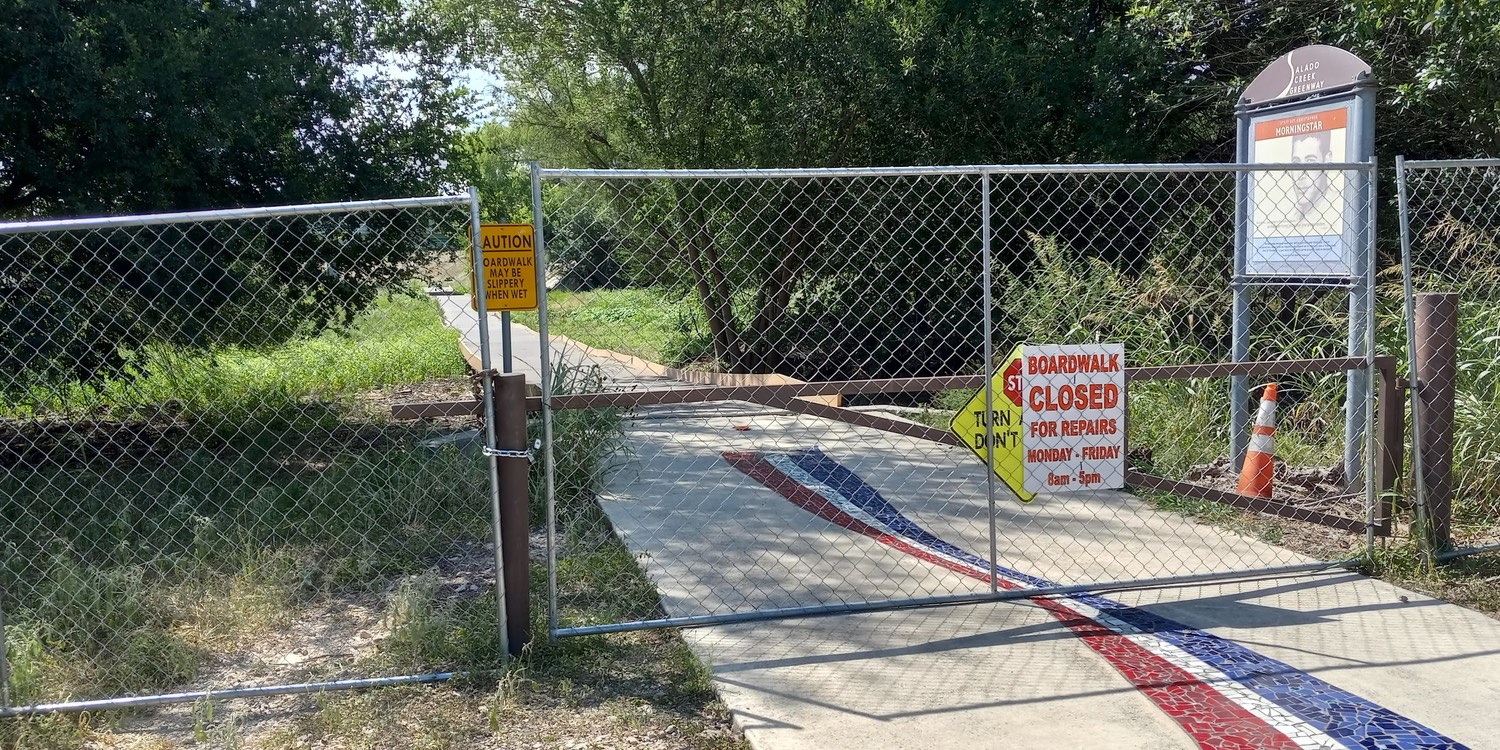 Repairs are underway for the Morningstar Boardwalk, beginning from the airport side and working its way to Lady Bird Johnson Park area. According to a foreman, they are replacing boards and then reinstating the anti-skate plates. Serious fencing has been installed thus making it harder for anyone to go around when there is work underway on the boardwalk. Workers re-open it on the weekends.

These repairs are much needed. Cyclists confirmed that the structure's condition is much worst and is no longer safe. One cyclist said that he hit a buckled board due to flooding and almost lost control (but then, he may have been rolling through at an unsafe speed). Overall, parks officials are focused on safety, thus prompting them to put up a chain-link fence this time around.

Some riders have inquired about a detour when the boardwalk goes offline again. Ross said, "Unfortunately, we don’t have a good detour route for the period in which it will be under maintenance."

The boardwalk is a memorial to U.S. Army SSgt Christopher Morningstar who was killed by a roadside bomb in Al Husayniyah, Iraq on 5 Feb 2006.

When the trail first opened around 2010, the boardwalk was slippery when wet. Cyclists back then had to slow down and take it easy. Since then, anti-skid plates were installed; however, the screws have been known to work loose and puncture tires. 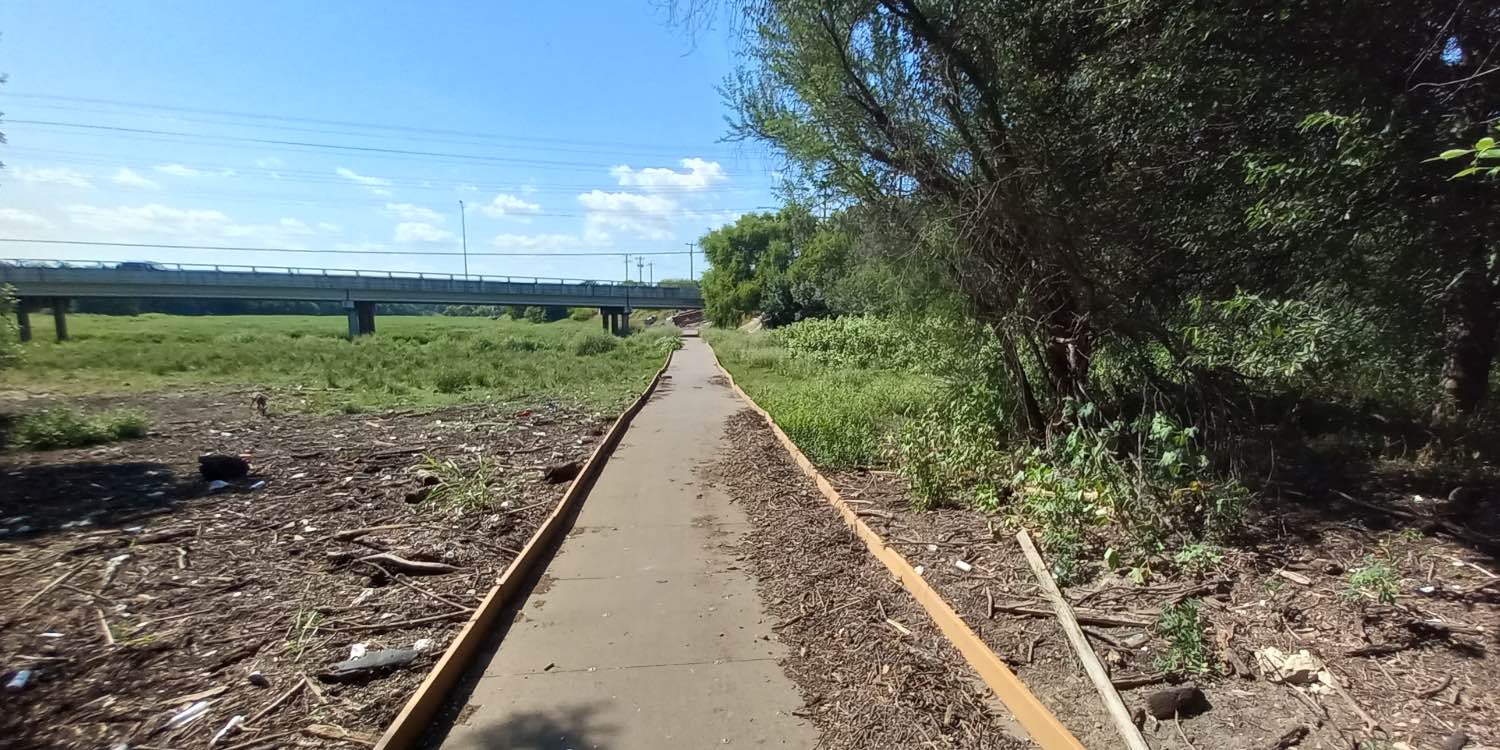 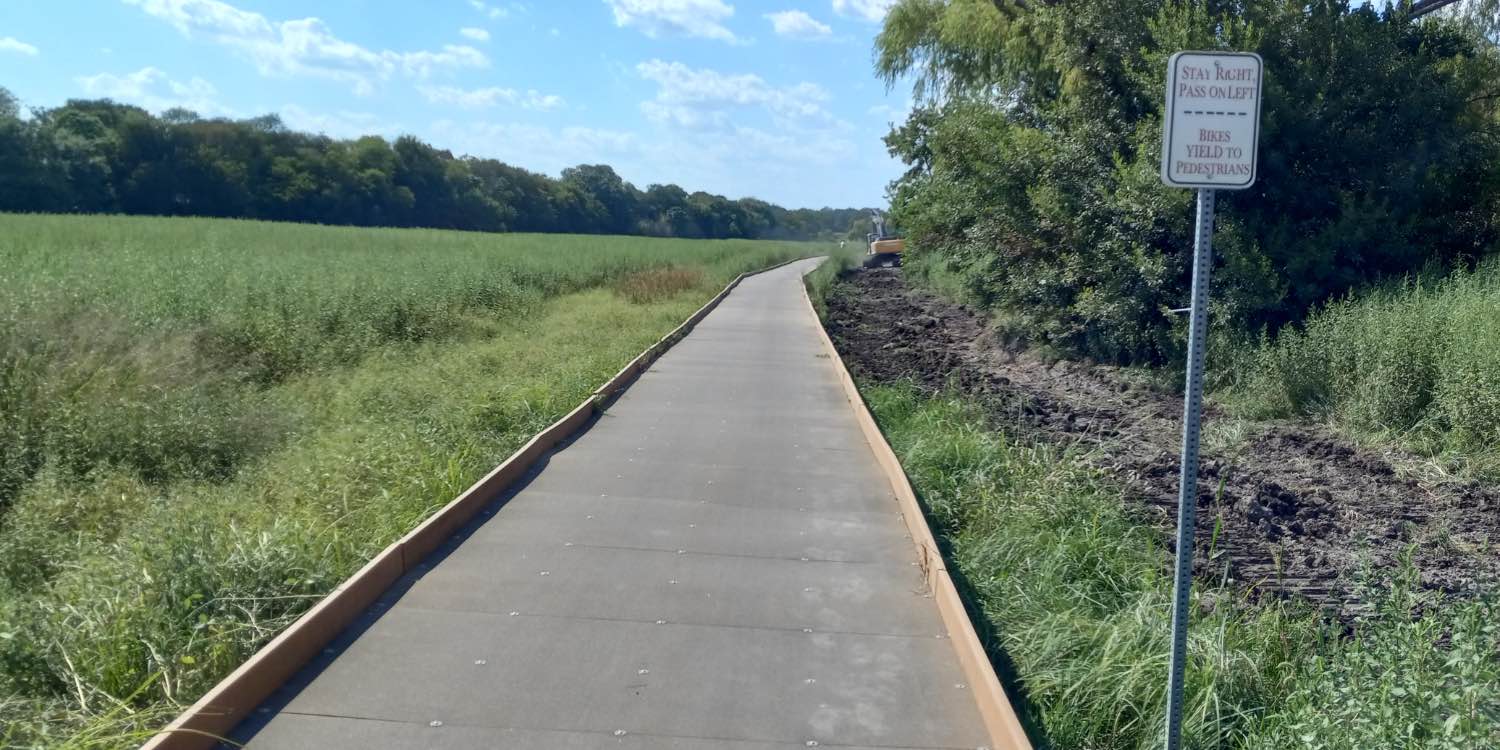 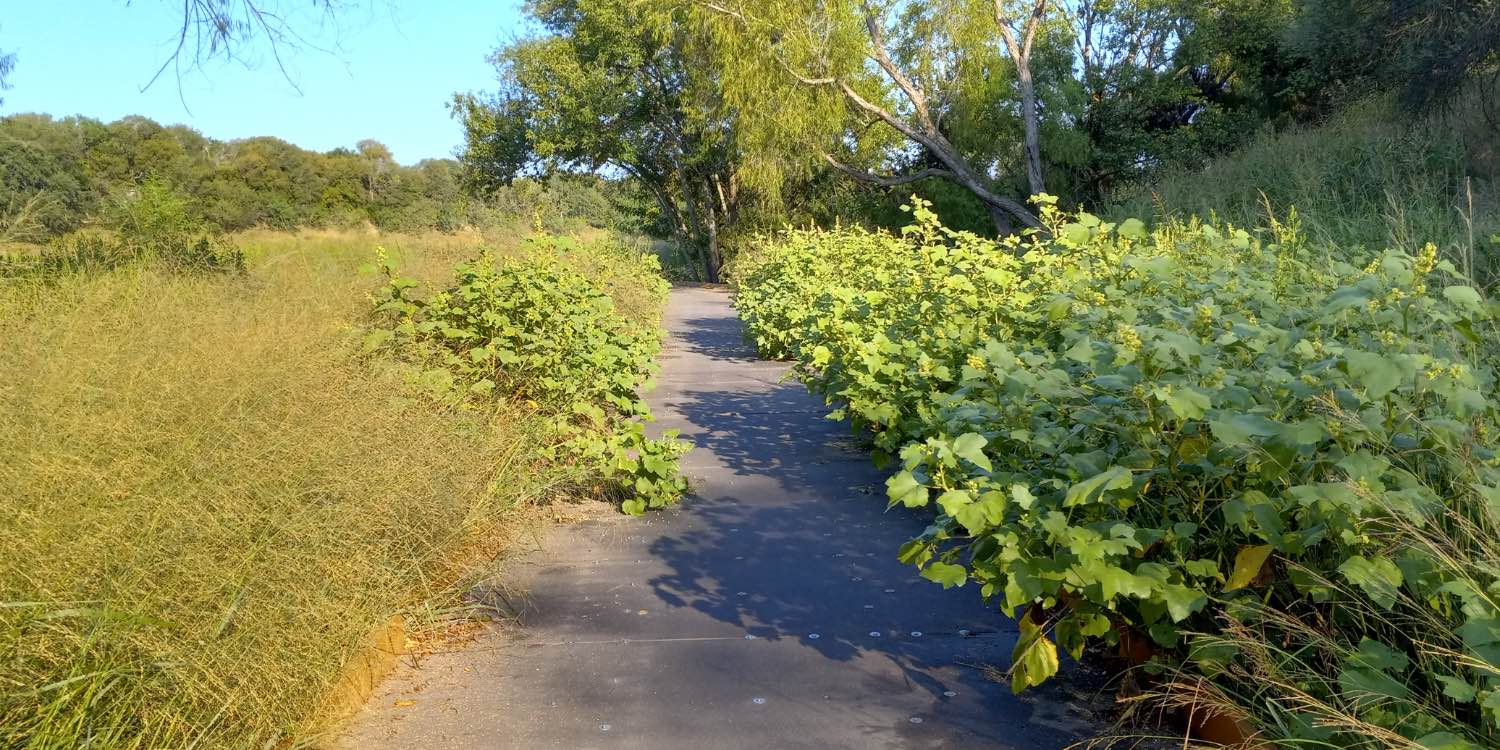 Overhanging overgrowth creates a hazard on the Morningstar Boardwalk—Photo: SRR

Sep 2021: The boardwalk was re-opened; however, cyclists were greeted with overgrowth. 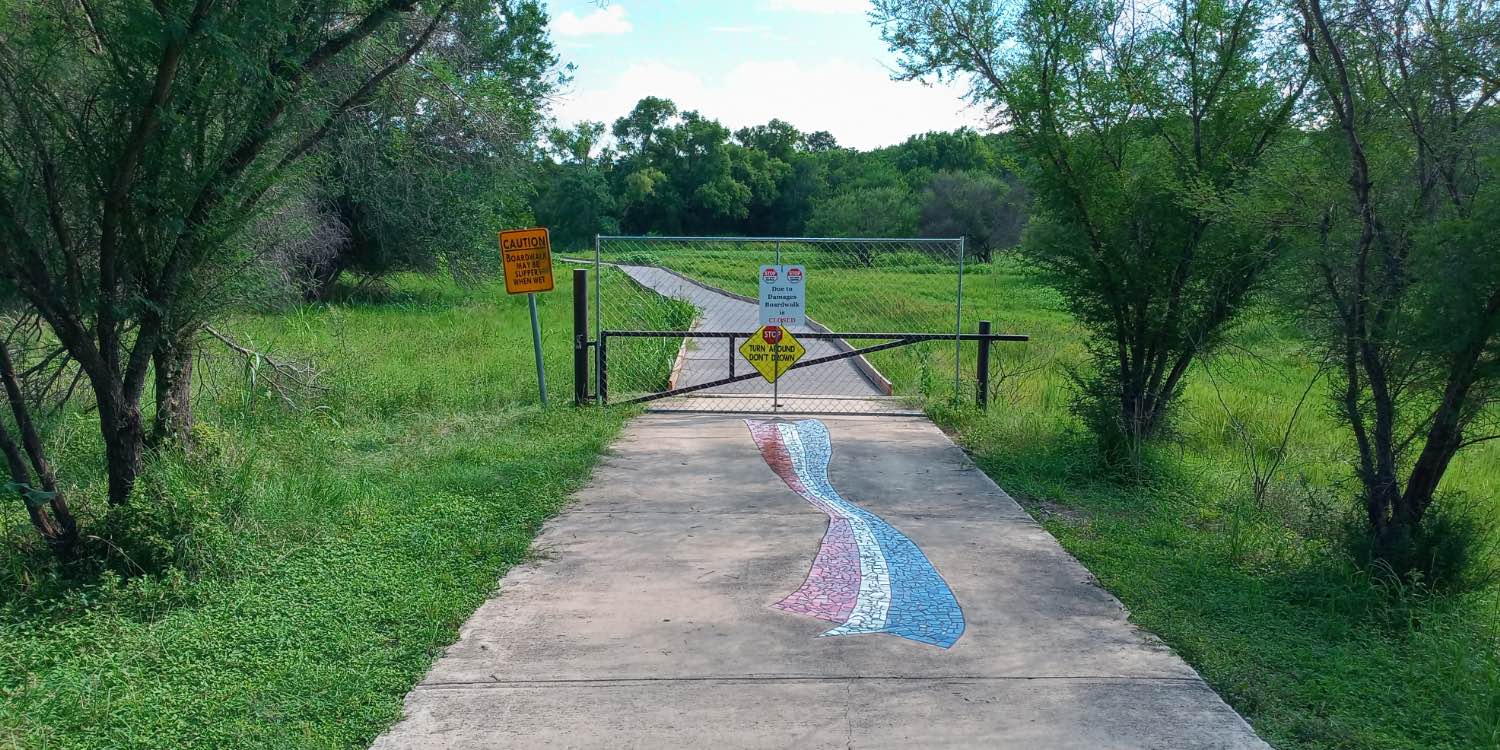 July 2021: The boardwalk was closed due to flood damages that included raised boards and partially collapsed segments on the LBJ Park end. 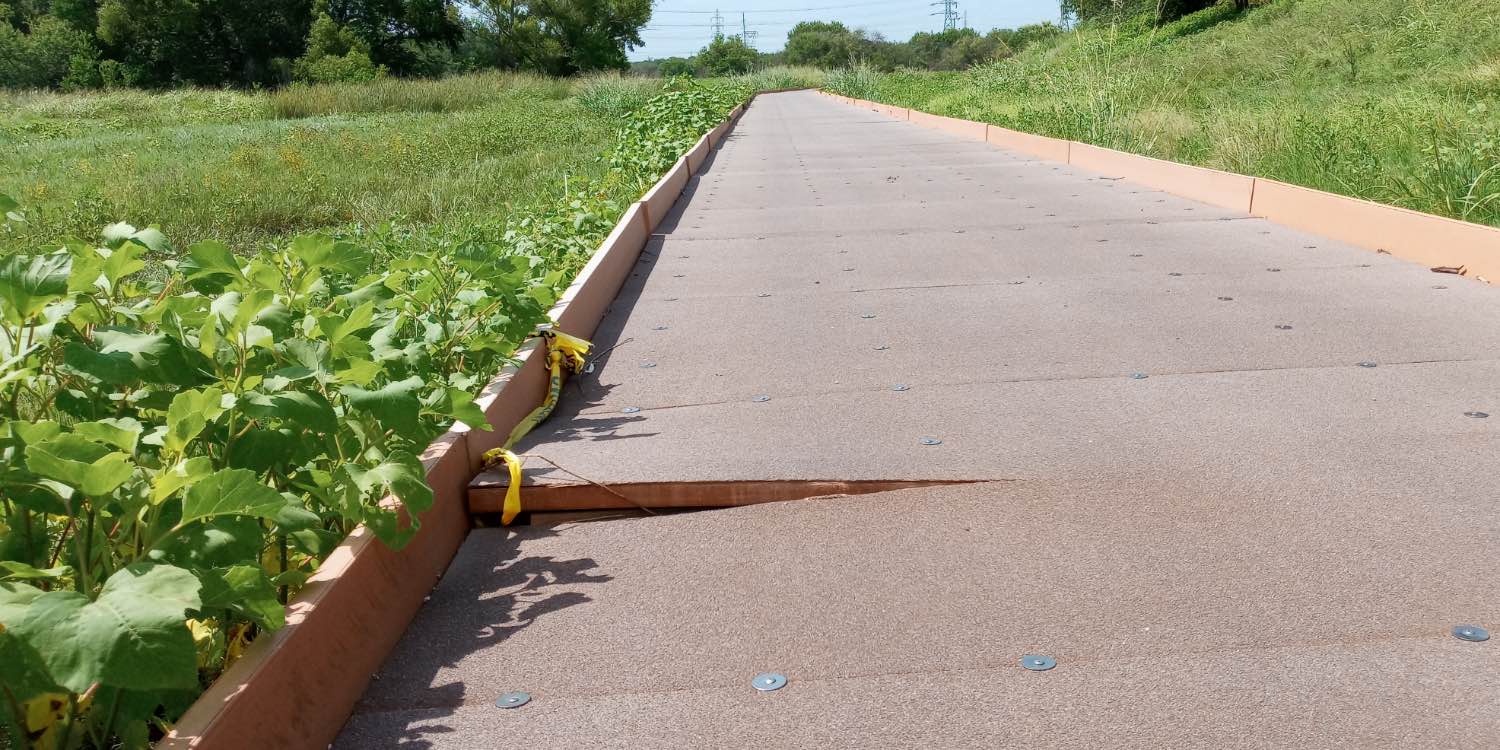 Board raised on boardwalk posing a hazard for unwary cyclists—Photo: SRR 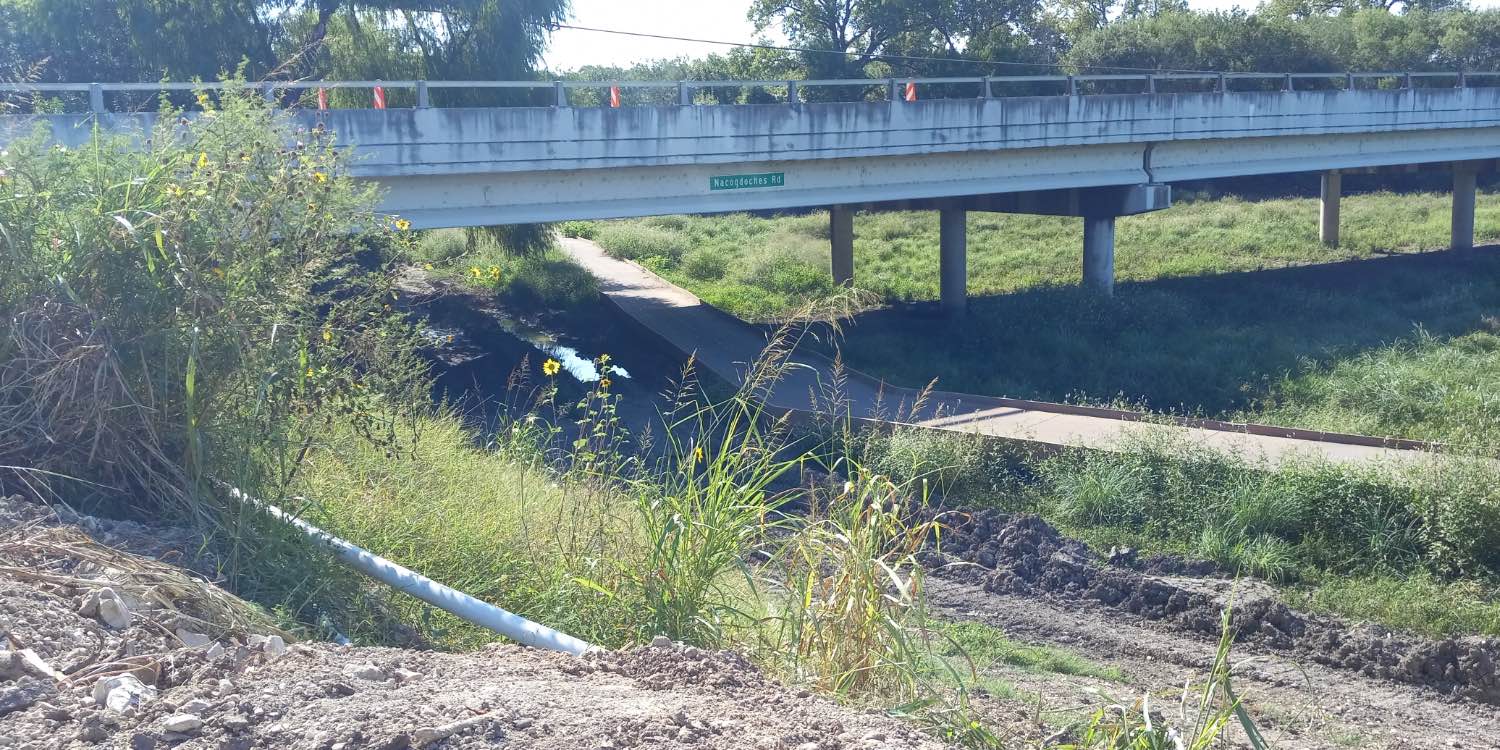 Due to safety concerns, a Meetup group ride leader will not schedule any rides across the boardwalk. He canvasses the trails ahead of scheduled rides to ensure that they are safe. Otherwise, the traffic roars on as cyclists navigate their way around the barricades and keep on cranking it—not slowing down a bit. Cyclists have previously reported that the boardwalk had settled down between Nacogdoches and where the boardwalk ends. Dan Holubec, who rides this route often, reported that he felt the boardwalk structure flexing. It does not take much rain for parts of it to go underwater.

May 2018: A motorized vehicle operated by bug sprayers was too wide for the boardwalk. As a result, it caused damage to the baseboards, thus prompting officials to close it.