AUSTIN—Organizers of the Great Springs Project announced today their proposed trail that will run from Austin to San Antonio via San Marcos and New Braunfels. The 100-mile (161 km) path will connect the four well-noted springs of the four cities: Barton Springs, San Marcos Springs, Comal Springs, and San Antonio Springs.

In some places, the trail is already completed such as the Violet Crown Trail in the southern part of Austin. In other places, trail alignments have been planned by local communities or have alignments that are still to be determined, according to GSP's press release. In San Antonio, it had been noted by San Antonio Parks and Recreation officials that the GSP trail may come in to the proposed Mud Creek Greenway in McAllister Park and connect to the Salado Creek Greenway via the park's dog park trailhead. 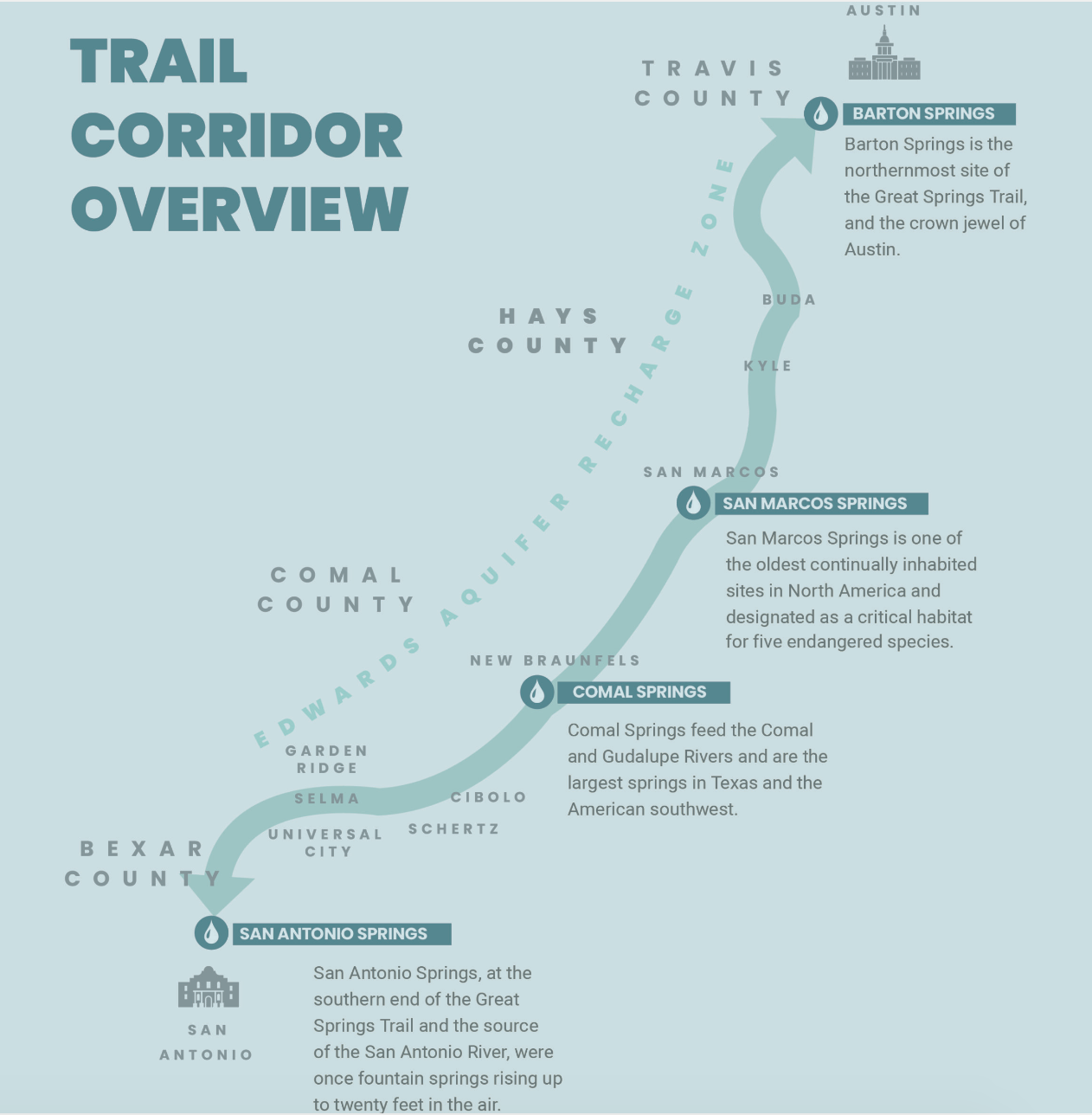 The locations of these springs

Barton Springs is located south of the Ann and Butler Hike and Bike Trail that is well known for its boardwalk over the Colorado River. It is Austin's well-known public swimming venue.

Comal Springs is found next to the Panther Canyon Nature Trail on Landa Park Drive, located north of Landa Park in New Braunfels. Landa Park Drive runs into California Blvd. The spring feeds the Comal and Guadalupe Rivers; it is the largest springs in Texas and the U.S. Southwest.

San Antonio Springs is located in the vicinity of the University of the Incarnate Word at Broadway and Hildebrand Avenue. It was once a fountain springs that shot water upwards to 20 feet (6 m) high.

When will this trail be open?

GSP is targeting 2036, in time for the Republic of Texas Bicentennial. Trail officials had noted that it depends on many factors. Sections of trail along the route will be built in phases, all dependent on funding, obtaining right-of-way and permits along with design and construction.

Who will pay for this?

On their website at greatspringsproject.org/vision/, they noted that a project of this magnitude requires many sources of investment. They also noted that other regional trails elsewhere in the U.S. have been successful in leveraging local, state, and federal funding along with private contributions. Well-noted trails have tourism draw; this translates into tourism dollars for the surrounding hospitality industries such as hotels, restaurants, and bike rental entities.