Greenway trail funding may be on the line with city council

It was a cool November night—16 Nov 2021. It was a nice night for approximately 80 cyclists to pedal to a city-held bond proposal hearing. $110 million has been proposed for the greenway trails; however, the city council may be looking at diverting some of the funds from the greenway trails to other projects such as flood control.

Representatives from various entities presented their case for funding. The city issued a "staff recommendations" table as follows:

In spite of the grandeur of the Mission Reach and Medina River trails, a handful of south side residents complained that their part of town had not received their fair share of recreational facilities including trails as compared to the affluent sectors of the city. Otherwise, it was an assortment of pleas including one that calls for protecting the birds and other wildlife.

One cyclist stated that the greenway trails help fight against ailments such as diabetes, mental issues, obesity, and other health issues. The trails also serve as a safe alternative to streets.

Maps from Parks and Recreation

Homer Garcia III, the director of Parks and Recreation, rolled out a map that depicts new trail development that would be dependent on the 2022 Bond. 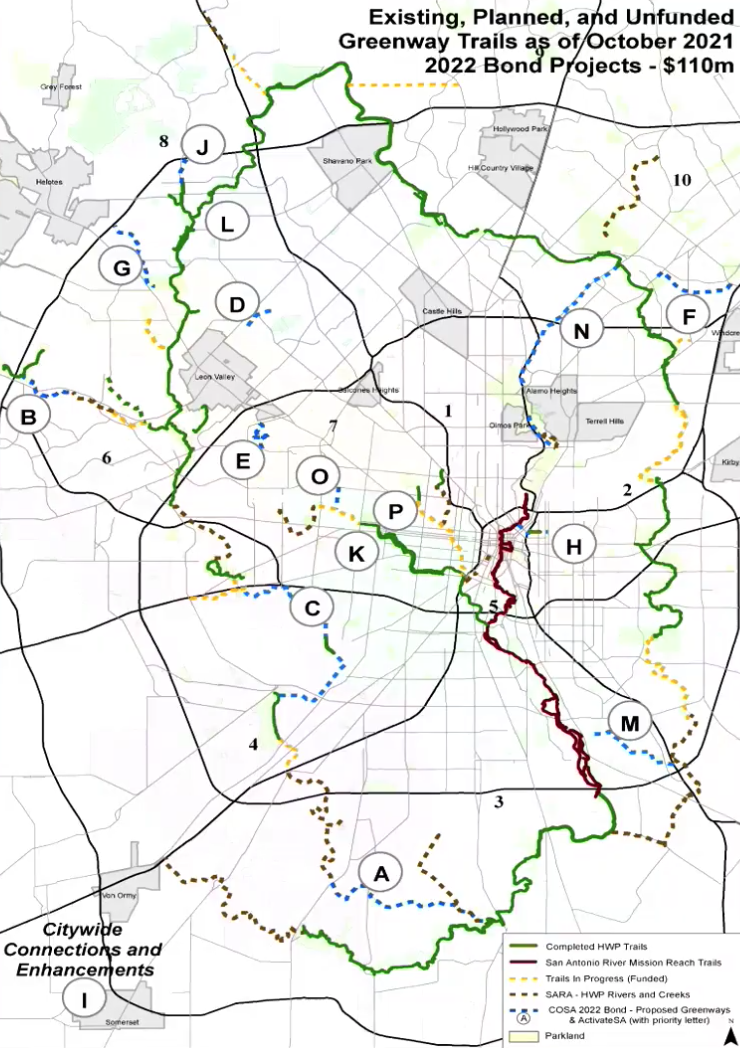 The map reflects points of interest including the extension of the Salado Creen Greenway all the way past I-410 for a direct connection to the Mission San Francisco De La Espada Catholic Church, a point where the Mission Reach and Medina River trails meet. The other development that stood out is the extension of Leon Creek via the Port San Antonio, the former Kelly AFB, as a way of continuing this greenway to Medina River. Leon Creek itself flows through Joint-base San Antonio Lackland AFB, which is off limits to any public trails.

As the map shows, these connections will put a ring around the city.

What's on the wishlist?

This is dependent on the outcome of funding decisions: