Producing videos adds to the fun of cycling

We've seen the multitude of videos produced by cyclists who add to the fun by capturing their rides on video. It really isn't all that difficult to produce a video. All you need is a decent camera that can be mounted to the handlebars or helmet, a non-linear editing (NLE) software, and a laptop that can run the software. The rest of it is up to you to learn the functionalities of the camera and the editing software.

Why is the software called non-linear editing?

So that we can explain, we start with the pre-21st century method that dealt with linear editing of movie film. Footage was shot and then edited in a predetermined, ordered sequence. For those who worked with home video taping such as the earlier VHS and later 8mm tape formats, it required planning the entire sequence in advance so that it can be shot in a predetermined, ordered sequence. Editing was possible only with analog tape playback and dubbing capabilities. The drawback is that the dubbing process provided a finished product as second generation, hence, there was a generation loss in quality.

Since the advent of digital technology, analog became a by-gone era—thankfully. With NLE, segments do not have to be shot in a chronological sequence. Each segment is preserved in separate files such as MP4 and AVI types. Then, these files can be placed on a timeline in the sequence you wish. It is always paramount to shoot extra footage for such purpose of providing B-roll footage for enhancing the presentation with extra scenes that can be easily added to the sequence.

Most cyclists who shoot videos are simplistic in nature: camera mounted on a helmet or handlebars for a forward shot and techno music provided for the audio. Most of these shows have no narrations. At Solid Rock Riders, its videos feature superimposed maps, factoid callouts, sound effects, and classical music. SRR's safety training videos have a narrator.

How a SRR video is produced 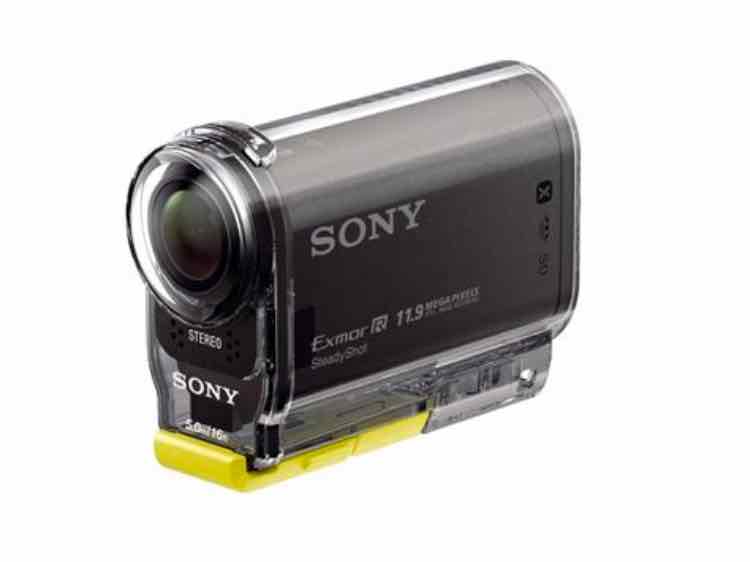 A Sony ActionCam model HDR-AS30V is mounted on the handlebars of a Cannondale Rush mountain bike and set for 720p resolution, 60Hz frame rate, 1280 x 720 dimensions, and non-shake activation. This is adequate for producing a video for YouTube. The video MP4 files are transferred to a Macbook Pro laptop and imported into TechSmith Camtasia, an NLE software. Topo maps by the U.S. Geological Survey (USGS) or trail maps by AllTrails.com are superimposed on the footage to reference where the ride is taking place on a trail. Classical music and "swoosh" sound effects are brought in to provide the audio. In most cases, videos are timed to fit the duration of the classical movement. Likewise to many other cycling videos, there are no narrations.

Drone technology is being evaluated for future shots. Laws are under review to determine where a drone can be flown and video footage captured legally. Obviously, the section of the Salado Creek Greenway that literally runs across the property of San Antonio International Airport (SAT) would be off-limits. 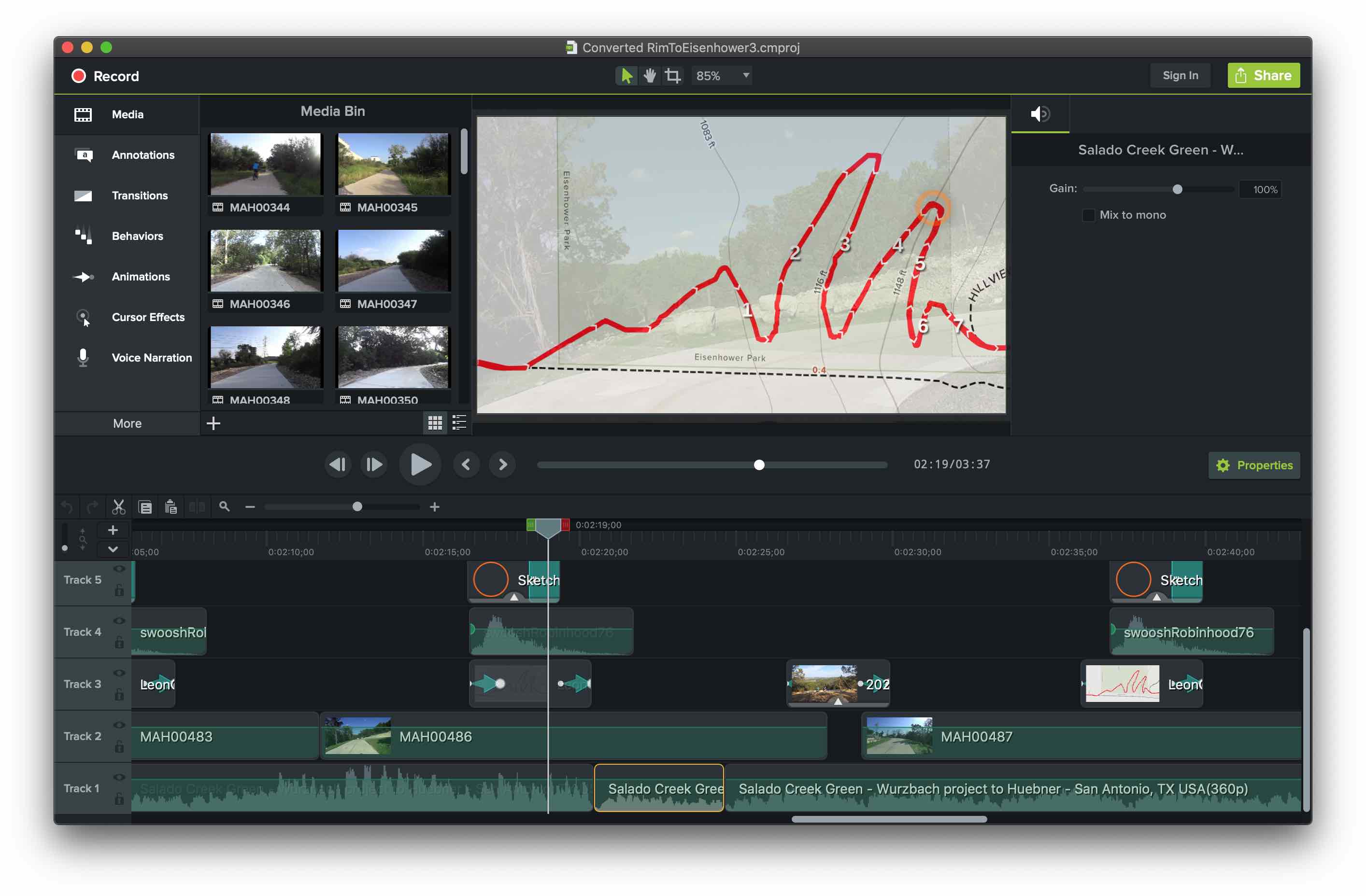 The Rim to Eisenhower Connector video queued on a Camtasia video editor—Software: TechSmith

Just recently, SRR released "The Rim to Eisenhower Connector featuring the switchback," a new trail that is a part of the Leon Creek Greenway. It connects The Rim trailhead to the Dwight D. Eisenhower Park trailhead where it meets the Salado Creek Greenway.

The 3:37-minute presentation began with prelude, a slideshow of construction photos. Next, the motion picture footage started at where the Leon Creek Greenway crossed Leon Creek and headed toward the seven switchbacks. A superimposed map appeared with an animated circle for each switchback change to another. The footage continued to the Eisenhower trailhead where at the end, credits rolled followed by a quick slideshow of scenic photos.

The music selection was Josef Wagner's "Unter dem Doppeladler" (Under the Double Eagle), performed by the U.S. Navy Band. This classical piece was a favorite played by John Philip Sousa.

The switchback map was obtained by permission from AllTrails.com and the switchback tracing was done with a Lezyne GPS bike computer. The Lezyne-produced FIT file was uploaded into the AllTrails website where it displayed the switchback. A snapshot was taken and imported into the Camtasia video editor. 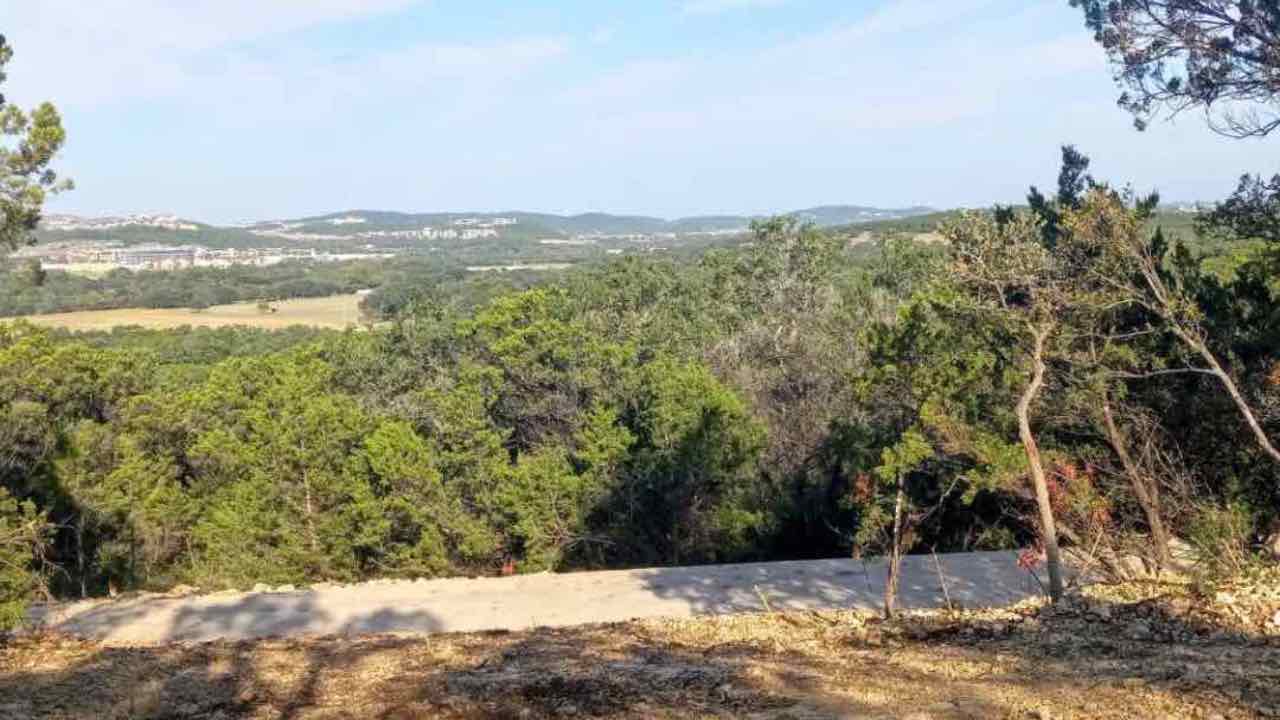 View of Texas Hill Country from the 5th switchback of the Leon Creek Greenway in Eisenhower Park—Photo: SRR

The first videos produced by SRR were released on 31 Aug 2012. They were short, safety videos that covered the following: 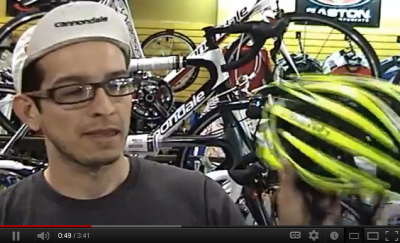 These videos were conceptualized, storyboarded, shot, and produced within the same day—a span of five hours. Arrangements were made over the phone with three technicians of Planet Bike at its Stone Oak Parkway location. Four training sessions were outlined. Patrick Innis, one of the technicians, took good notes. He and Seth Rafie staged bikes, helmets, and gloves for the four video shoots that were done under an hour that day. The footage was edited on a Windows 7.1 version of Camtasia 7, using Camtasia's stock background music. B-roll footage of trailheads were featured at the beginning of each presentation. By 17:00 that afternoon, the videos were live on YouTube.

Since that time, Innis had joined Bike World and appeared in two more series filmed in 2019:

On 10 Sep 2012, a A Tribute to Brooks AFB was released through Backerhaus (then Backerhaus Media). Produced on Adobe Premiere 6.5 with photo images, it received good reviews mainly from those who served in the military and had been stationed at Brooks. The base is gone; in place is Brooks City-Base, a venue that will eventually serve as a vital link for the Salado Creek Greenway to the Mission Reach trail. 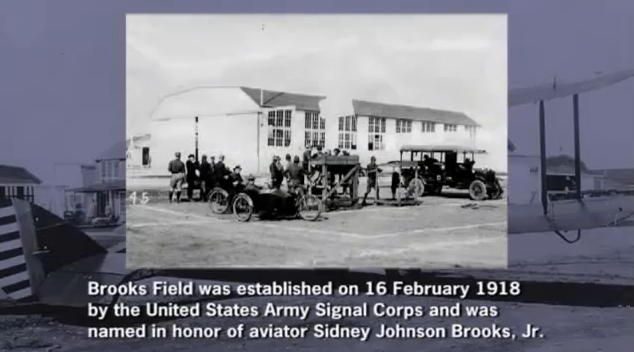 Ride videos came later. The first such video was released on 7 Jan 2014—Hill Country Village, Texas. It utilized Sony's GPS mapping software to show the roads of Hill Country Village, a small, wealthy berg located in north central San Antonio. Over time, additional ride videos evolved. Some of these videos were released through Backerhaus Media and Spectrarama Pictures branding. These videos are available for viewing at Cycling in San Antonio.