Update: How Salado Creek Greenway could be extended to Mission Reach

• Update: How it could be extended to Mission Reach

Concrete has been poured for the extension of the Salado Creek Greenway from Southside Lions Park to S.E. Military—Photo: SRR

Concrete work is underway for the extension of the Salado Creek Greenway from Southside Lions Park to S.E. Military, located in the southeast part of San Antonio. According to the city's Greenway-Trails website, the 3.1-mile (5 km) extension is due to open in Spring 2022.

The new extension connects near the park's Lions Park Lake bridge and follows Salado Creek to S.E. Military. The trail will traverse the historic Pecan Valley Golf Course, the site of the PGA Championship in 1968, won by 48-year-old Julius Boros, his third major title. The tournament was televised on ABC. Designed by J. Press Maxwell, the golf course opened in 1963 and closed in January 2012. There have been talks about converting it to a par-3 course for those with disabilities.

The trail ends in the vicinity of the Republic Golf Course, another defunct golf venue. It opened around 2002 and closed down in May 2020. It featured an upscaled club house that served chef-inspired lunches.

Projected trail illustrates how it will connect Southside Lions Park to S.E. Military—Maps: AllTrails.com, Graphics: SRR
This extension will make the Salado Creek 34.5 miles (56 km) from its S.E. Military location to Dwight D. Eisenhower Park. With its connection to Leon Creek Greenway, it would make its entire run to W. Military 53.5 miles (86 km).

How it could be extended to Mission Reach

Brandon Ross, project manager for the greenway trails, indicated that future plans call for continuing the trail to Brooks Park. The trail will run along Salado Creek from S.E. Military to an area located right next to I-37. Conveniently, there is a canal that runs under the freeway to the edge of Brooks Park. Once it reaches Brooks Park, it'll be an easy route via adjacent Brooks City-Base to Greenline Park. Recently, a $2 million trail had been completed at Greenline Park that connects to Acequia Trail, a spur of the Mission Reach. 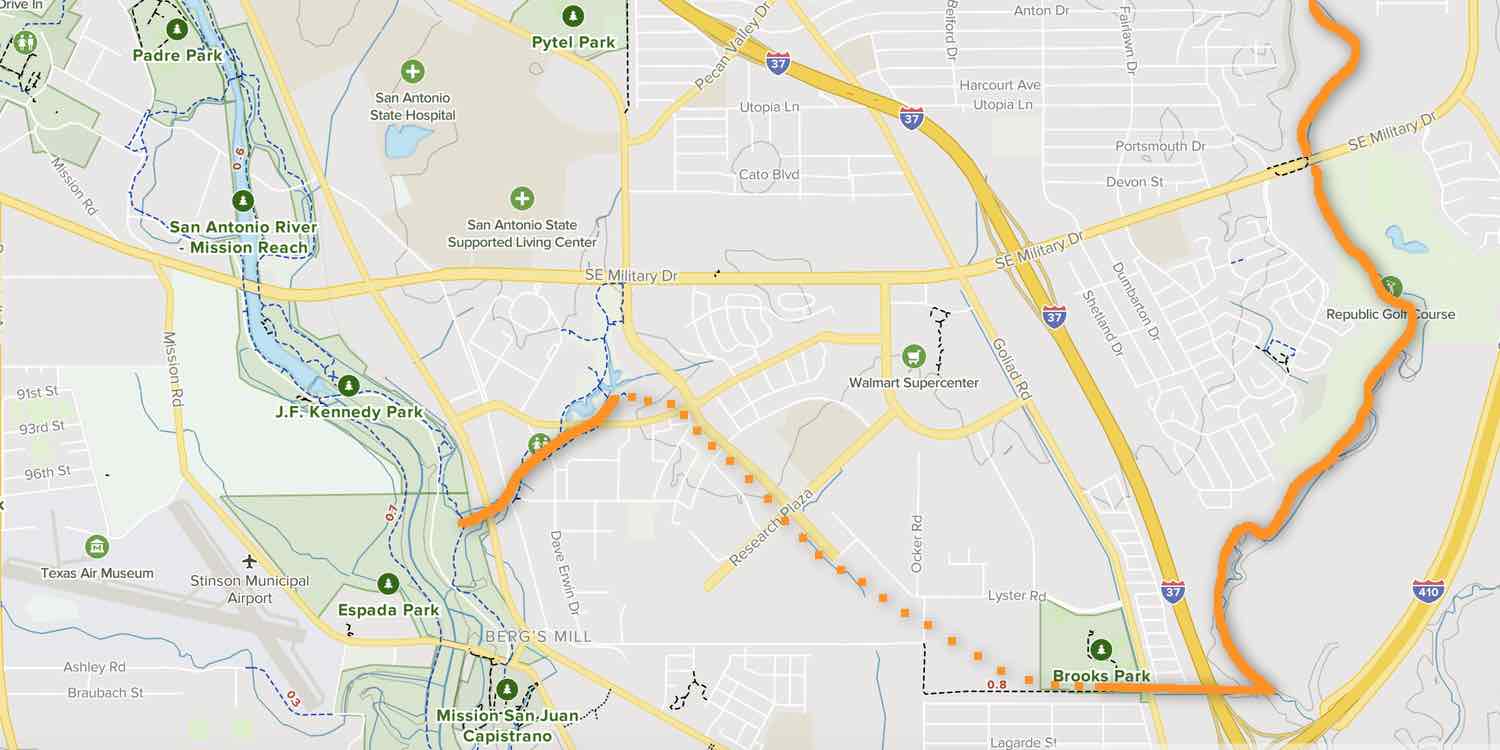 Conceptualized map of how the Salado Creek Greenway could be connected to Brooks Park and Mission Reach—Maps: AllTrails.com, Graphics: SRR

The Salado Creek Greenway is to be extended further south where it will run under I-410 and then I-37. From there, it is to be routed to the Mission San Francisco de la Espada area where the Mission Reach meets the Medina River Greenway.