As a result of the rise of cycling popularity, greenway trails have cropped up all over the country. The development of the Howard W. Peak Greenway Trails System began in the early 2000s. Other cities including Fort Worth and Houston have jumped on the greenway bandwagon as those cities have been pouring plenty of concrete.

So how does San Antonio's greenway trails stack up to trails in other cities? Using the AllTrails.com website as part of the research, it has been determined that Fort Worth leads the way in the Lone Star State with an interconnecting trail system that runs over 100 miles (161 km) throughout the city. San Antonio easily comes in second, not far behind Cowtown's endeavor.

While examining AllTrails data, the following criteria were used to determine the impact the trails have on a community:

Typically, some cities have short-run trails dotted throughout its map. Most parks will have trails in this genre. Some of these cities have converted old railroad beds into paved trails such as the case is with Dallas and Houston.

We have the lineup of the trail systems.

Cowtown leads the way with a 100-mile (160-km) plus Trinity Trails system that interconnects the city with the neighboring cities of Haltom City and Richland Hills.

Maintained by the Tarrant Regional Water District, their main trail is the Trinity River Trail, a 17.8-mile (29-km) that follows the Trinity West Fork and Clear Fork from Richland Hills to Benbrook Lake, a recreational lake located in the southwest sector of the city.

The Trinity River Trail has major spurs for these tributaries: West Fork Trinity and Marine Creek. Another trail runs along Sycamore Creek which crosses under the Martin Luther King Expressway and extends to I-20 on its southside. The West Fork continues eastward and merges with its Elm Fork in Dallas where it becomes the Trinity River; it flows through East Texas to Galveston Bay. In 1690 Spanish explorer Alonso de León named the river "La Santísima Trinidad," Spanish for the Most Holy Trinity.

There have been discussions in the DFW communities to connect from Fort Worth to Dallas via the mid-cities of Arlington, Irving, and Grand Prairie. Should that happen, that would be awesome for North Texas.

The Alamo City has two trail systems, thus making it second best in Texas with at least 80-mile (130-km) trails connecting most of the city. The city manages the Howard W. Peak Greenway Trails System and the San Antonio River Authority manages Mission Reach, a trail that connects the four missions, now a World Heritage site. 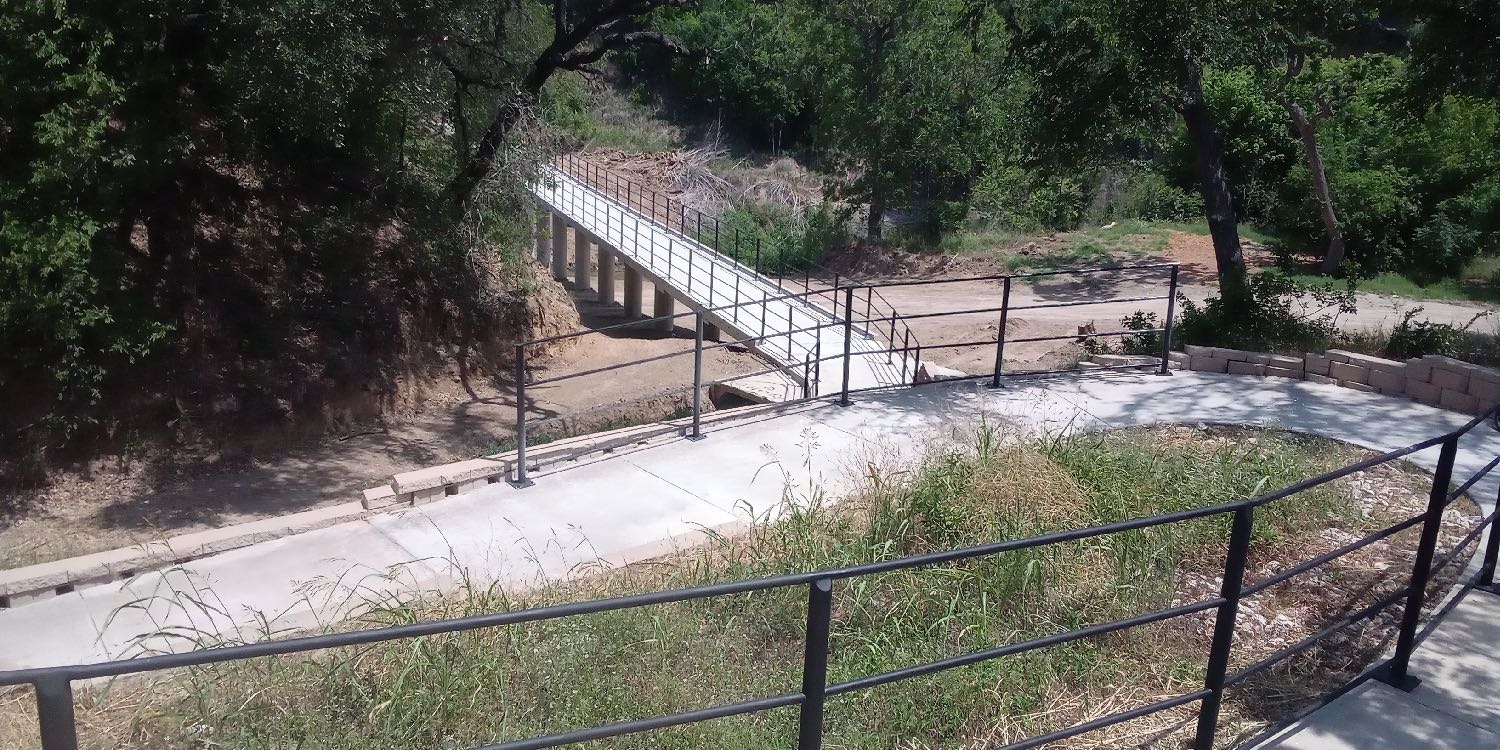 Like other cities, San Antonio will continue to add more trails and spurs that will connect its main streams—Leon Creek, Salado Creek, San Antonio River, and Medina River.

Dallas comes in 3rd place for the Lone Star State. Dallas has trails that have a total distance of at least 90 miles (145 km); however, these trails are not fully connected like the ones in Fort Worth and San Antonio.

We identified several trails worth riding: Trinity Levee Trail some of which is gravel, Katy Trail (following old Katy railroad beds), Ridgewood Trail which connects to the SOPAC Tail and the White Rock (lake) Trail. The Trinity Levee Trail is on both sides of the Trinity River. Unfortunately, cyclists must take to the roads to get from one major trail to another.

The Houston area has five major trails and an assortment of short trails throughout the area. The state's largest city has trails leading into its downtown area on old railroad beds. Unfortunately, many trails are dependent on crosswalks, thus putting cyclists at risk with motorized traffic.

The City of Katy has done exceptionally well with the development of trails. The Buffalo Bayou Trail connects a trailhead at the Sam Houston Tollway and runs to Barker Cypress Road and George Bush Park in Katy at a distance of 10 miles (16 km). It features a spur into Terry Hershey Park. Bush Park is situated in the Barker Reservoir which flooded during Hurricane Harvey in August 2017. The Buffalo Bayou area features an assortment of mountain bike trails.

Austin is a popular cycling town for road and mountain bikes. The Barton Springs area is known for its MTB trails. Overall, Austin does not have a network of trails that connect its entire city. Instead, it has tons of bike lanes and short lines throughout the area with one long trail known as the Roy and Ann Butler Hike and Bike Trail that connects to a trail that runs along Bergstrom Highway and then to Manor Highway where it ends at the Manor New Technology High School. Due to the influence of the University of Texas, one can find substantially substantial bicycle traffic on the streets in Austin.