Your Health / It's Radioactive


Back in the early 20th century, cyclists thought that lighting up a cigarette before a mountain stage would open the lungs. It was the era's red-blood cell doping—a means of transfusing the blood with red blood cell-rich blood so in turn can handle more oxygen. It was dangerous and could have been lethal.

According to American Lung Association data, approximately 48 million American adults smoke and 4.8 million adolescents smoke. That equates to 53 million, about 17% of the nation's population. 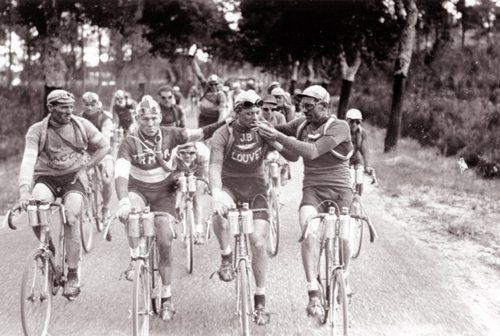 What most people don't seem to know is that cigarette smoke is radioactive. The radioactive materials—polonium-210 (Po-210) and lead-210 (Pb-210)—are natural ingredients that adhere to tobacco leaves. The amount of the radionuclide content depends heavily on soil conditions and fertilizer use. According to various studies, polonium-210 and lead-210 remain present in smoke as it reaches the lungs. Its alpha particles penetrate the bronchioles, the branches of lung passages, where tar builds up and traps the radionuclides against the sensitive tissues of the bronchioles. Lead-210 has a half-life of 22.3 years and polonium-210 has a half-life of 138 days. Each cigarette comes packed with .04 picocuries of polonium-210. Even though the concentration appears to be low, it's the alpha particle accumulation that adds up as part of one's lifetime exposure to ionizing radiation. For a person who lights up one and a half packs a day, it adds up to a dosage of 300 chest x-rays a year.

Radioactivity from cigarettes is nothing new; it has been a known fact since the early 1960s. Tobacco companies tried unsuccessfully to figure out a way to remove the radionuclides. Research has proven that filters remove only a part of the radioactivity thus blowing the arguments by some smokers that filtered cigarettes are safer.

Smoking is ranked number 1 as the cause of 443,000 preventable deaths in the United States. Overall, there are 123,000 lung cancer-related deaths annually attributed to smoking cigarettes. About 20% of deaths in the U. S. are related to smoking; this is more than alcohol abuse, motor vehicle accidents, suicide, homicide, AIDS, and illegal drugs combined.

In addition to smokers, those exposed to secondhand and side-stream smoke have been shown at risk as well. In some studies, it has been discovered that secondhand and side-stream smoke is two to five times more concentrated in some carcinogens than the mainstream smoke inhaled by a smoker. Each year, approximately 3,400 non-smoking adults die of lung cancer as a result of breathing the smoke of others’ cigarettes. An estimated 46,000 non-smokers die from heart disease as a result of environmental tobacco smoke. Secondhand smoke comes packed with over 4,000 chemical compounds, including 69 known carcinogens such as formaldehyde, lead, arsenic, benzene, and polonium-210.

Cost of cigarettes should be another reason to quit. In Texas, a pack runs about $7.00. A pack and a half of day is $10.50; that adds up to $3832 annually. That would buy a very nice carbon frame road or mountain bike.